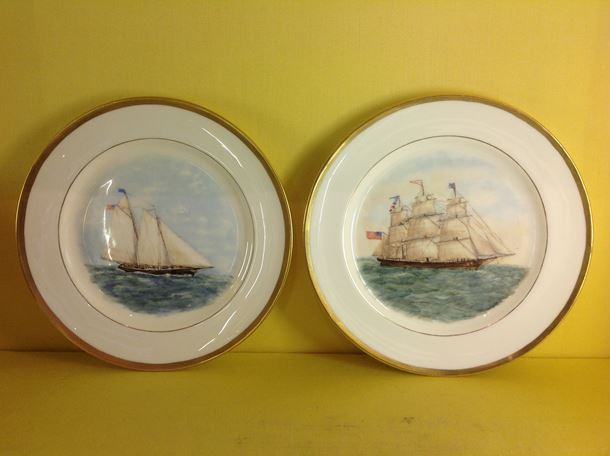 American Interest. A rare set of twelve Minton dessert plates, each painted in coloured enamels by Lillian Gary Taylor with named American and English vessels, both sail and steam, including the C. W Morgan, the Blue Jacket, the USS Margaret and the British tea clipper Ariel, within gilt line borders, 9" diameter, printed marks in puce, some with retailers mark for Hopkins, Baltimore, and each extensively inscribed in black enamel verso, signed Lillian Gary Taylor and dated 1925

Lillian Gary Taylor (1865-1961), was the daughter of James and Lavinia Gary, born and raised in Baltimore. She married Robert Coleman Taylor in 1900, moving to New York, where she acted as hostess for her father when he served as Postmaster General under President William McKinley

During World War I Taylor commissioned Wedgwood to produce a range of 'Patriotic China' to her own designs, to help the war effort, selling pieces directly from her own home. By 1924, having sold 9251 pieces, including 384 teapots, she had raised $14,203.14, for war related charities, production ceased on Armistice Day, November 11th 1918