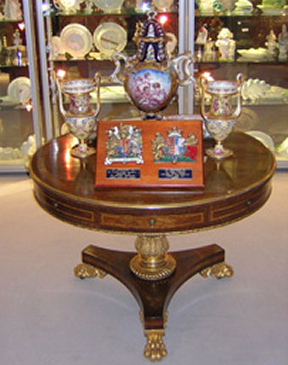 The company Albert Amor came into being at the turn of the last century when Albert Amor, on the death of his former employer Mr. Frederick Litchfield, a very noted antique dealer of the day, set up in business in St. James’s. By 1905, when an advertisement appeared in the magazine “The Connoisseur”, Mr. Albert Amor and Mr. W.L. Perkins had established a gallery at 32 St. James’s Street and begun to deal at the very top end of the decorative arts field.

Mr. Amor was the senior partner and Mr. Perkins was manager of the gallery floor.The business was far more general during the 1910s and 20s than it is at the present day. Advertisements within our archives show the diversity and grandeur of the business. On the 12th of July 1911, Albert Amor bought at auction at Christies the famous pearl necklace, which at one time belonged to Lily, Duchess of Marlborough, for more than £16,000. The firm also acquired and sold to a private English collector the dining saloon suite from the cabin of Admiral Lord Nelson on H.M.S. Victory.

The business prospered and the appearances of Mr. Amor at auctions were regularly reported in the Press. He soon established his reputation as THE authority on old English porcelain and was responsible for locating and acquiring the famous garniture of Chelsea Gold Anchor Vases formerly the property of the 1st Earl of Dudley and at one time residing at his lavish country house, Witley Court, in Worcestershire. The vases were sold by the Earl in 1884 for the princely sum of £20,000 to Lord Burton, who subsequently sold them at auction, and they were then acquired by Lord Astor of Cliveden. The vases were then lost for some years and quietly appeared at Christies. Mr. Amor realised the significance of the vases and successfully acquired them at the advantageous price of £6000; they were sold to Lord Bearsted of Upton House where they reside to this day.

In 1912 Mr. Amor purchased the entire Trapnell Collection of Bristol and Plymouth porcelain, for exhibition and sale at the gallery. The Times newspaper of the 12th December 1912 reported that the value of the complete collection - over 1000 pieces - was thought to be almost £15000.

The porcelain was transported to London by train and then conveyed to the gallery, under rifle guard, by a horse drawn carriage having specially patented pneumatic wheels! The collection included the very best and most important of all Bristol porcelain that had been manufactured and included examples of all the named services, such as the Smith, the Leinster and the Chough services, as well as the entire Burke service, a service made and given by Richard Champion, at the Bristol factory, to Jane Burke, the wife of the MP Edmund Burke, for which it notes her as “Best of British Wives” dated 3rd November 1774.

In 1921 Mr. Amor was appointed Antiquary to Her Majesty Queen Mary. This was the first time that such a post had been conferred upon a person. Mr. Amor’s duties for seeking suitable acquisitions were far reaching and there was much correspondence with the Palace. Mr. Amor and Mr. Perkins were frequently summoned to the Palace with items to be considered for the Royal Collection. Not all pieces met with approval. On one occasion a note from the Queen’s Lady-in-Waiting, the Marchioness of Cambridge, indicated that, although the Queen did not wish to purchase the pair of coasters offered at £6, the Marchioness herself would like to add them to her own collection.

In 1926 Mr. Albert Amor retired and the business passed to his partner Mr. Perkins who became the sole proprietor; however it was an east wind that blew and the depression of the 1930s soon bit hard. As the financial climate worsened, the firm, like so many others, moved to smaller premises and the employees were forced to take a cut in wages. The war clouds loomed and London was bombed and the firm’s new building in King Street took a direct hit in the same raid in which Christies headquarters in King Street suffered similarly. Mr.W.L. Perkins was soon succeeded by his son, Mr. John Perkins, and it was at this time that the firm sought to deal in English and Continental porcelain of the eighteenth century.

The next chapter of Albert Amor starts in 1956 when Mrs. Anne Margaret George, daughter of the notable pottery dealer Mr. Archibald Allbrook of South Kensington, joined the firm to help Mr. Perkins. Mrs. George had previously worked with W.B.Honey, the Keeper of the Department of Ceramics at the Victoria and Albert Museum, on the English Ceramic Circle’s 1948 Exhibition. Following the success of this exhibition, her help was sought by H.R. Marshall when he mounted an exhibition - “Coloured Worcester Porcelain of the First Period” - at Worcester House, the London showrooms of the Worcester Porcelain Factory, to commemorate the factory’s 200th anniversary in 1951.

The firm continues to deal with private collectors from all over the world, who build up their collections either by commissioning the firm to bid on their behalf or through specialised themed exhibitions that have been regularly staged since 1973. These exhibitions contain rare examples of the very best of 18th Century English porcelain, examples of which can be seen within the gallery’s pictorial archives; the list of available exhibition catalogues can also be found here.